I'm a lazy language learner, are you? 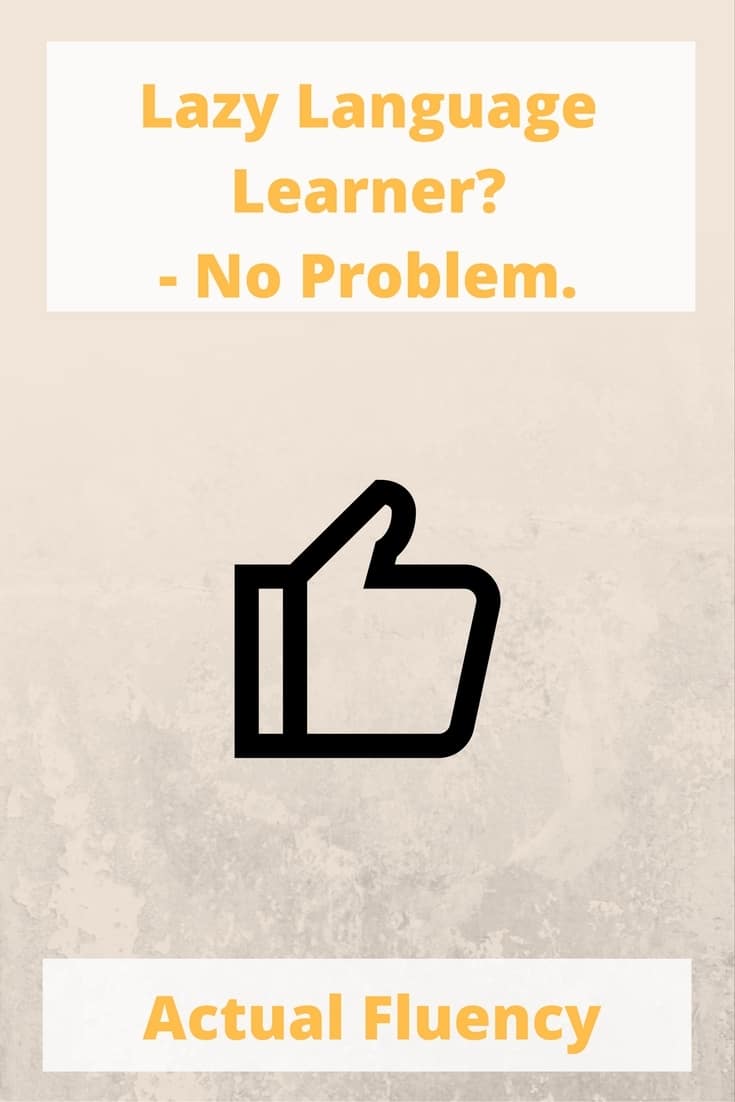 Spoiler: There's absolutely no problem being a lazy language learner.

Sometimes we can get a little carried away by basing our own expectations on vastly succesful language learners like Benny Lewis and Steve Kaufmann.

Ignoring the obvious motivational factors, as they do exist, what these success stories sometimes do is to falsely condition you to believe that you must also be able to learn a language quickly and without problems.

It's similar to these incredible stories of people dropping several hundred pounds of weight in no time, and then everyone jumps on the bandwagon, fails to see these huge numbers and immediately quit.

In fact, it's not similar, it's the EXACT same thing.

I'm a Lazy Language Learner and I Bet Some of You Are Too!

During my Russian studies, I did not set a goal of completing X number of hours per day.

I knew this was a silly goal to have, so instead I focused on doing something every day. By rewarding myself for consistency, I have accomplished a lot more than I would have if I tried to force myself to do a set number of hours per day.

I'm inherently lazy when it comes to things I have to do. That does not mean I don't enjoy the things I procrastinate from doing – trust me I've had times where I was too lazy to play video games.

This means that I really struggle with ‘putting the hours in' which is a topic I explored earlier on the blog in: How Long Does it Take To Learn a Language From Scratch?

My point is that I'm writing this blog not as another Benny Lewis or Steve Kaufmann, but as probably one of the worst language learners in the world. My hope is that by showing that even the worst can do it, then so can you or anyone else who are having doubts about learning a new foreign language.

A question I often see asked around the polyglot communities is how fast can I become fluent in language X? Or how long does it take to learn Y? And to me this is by far the worst approach to language learning. I'm learning a new language because of the enjoyment and the experience, not to see how fast I could actually do it.

And even Benny Lewis says that his 3 months are chosen, not based on his average language ability after that period of time, but because most tourist visas are 3 months so that's all the time he had in a country to study the language.

Let me just underline that I'm not blaming Benny for using the name, as the confusion is generally by readers who seem to think that Fluency in 3 months is easily attainable.

It's not even easy for Benny who has been doing it for 10 years.

And that's the point , you should learn languages at your pace, for your reasons and if you need to take 6-8-12 months or longer to become fluent, who cares?

By picking up another language your are entering into an exclusive club of human beings who speak more than 2 languages. You experience new cultures and countries and you open up hundreds of doors that would otherwise not have been open for you.

What is important though is that your language learning is consistent and you have a schedule you commit to.

For me I want to do something in the language every day.

Even if it is just 10-15 minutes I think it is way superior over doing say hours of study one day a week. It's too easy to forget when you are in the early phase of learning a language.

The guinea pig of language learning

So with all the above being said I can add a final point that I'm not just a lazy language learner.  I'm also a guinea pig. All my experiences and stories on this blog are results of me trying to learn languages, so that you can do it too.

Sometimes I fail miserably, sometimes I triumph but no matter what you can always be sure that I will share the results here on the blog.