Victor Berrjod was somebody I met in Berlin at the polyglot conference and he impressed me because he knew four or five Asian languages to quite a high level.

To me it's always impressive when Europeans dedicate themselves to languages outside of Europe. What was more remarkable was that he had brought along a book of his vocab memory method, designed originally by David James, and when I saw page up and page down of Chinese characters with explanations, I knew Victor was the real deal.

In the episode we discuss his language learning history as well as his ways of learning a language, which includes the gold-list method for vocabulary and some practical tips and advice for learning tonal or character-based languages. Well worth a listen if you are into or want to get into learning Asian languages. 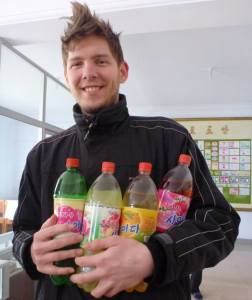 It seems like the Podcast is suffering from a curse! Last week my episode with Anthony Lauder was delayed several times due to unforeseen events outside of my control, and this week it seems like the same is playing tricks. I have been trying to get Victor on the podcast for a while, but as he lives in the dark countryside of Norway his connection to the internet is not stable enough to do the recording. He was kind of enough to go to his mother's house and do a recording with me last week.

What I didn't realize was that my iTalki lesson with my Russian tutor was very soon after, so immediately when we started recording I noticed the clock and this made me kind of rush things, which immediately had an impact on Victor as well. A few days later I re-listened to what we had recorded and it was not really great. We jumped from topic to topic and too many tangents and unnecessary explanations meant that the episode was far below the quality I envision for this podcast.

I decided to cut it and ask Victor if he would be generous enough with his time to come back, and thankfully he said yes. But the disasters did not stop with that. We sat down and we recorded what I thought was an amazing episode, only to find that the recording had been corrupted, or somebody had forgot to turn the recorder on, I'd like to say the former happened. Either way, we recorded AGAIN and this is what came of it.

I really enjoyed this episode, after it was done, because we had been given 2 warm-up recordings to kinda zone into what was important in the first, one might even say we distilled the podcast into what you see today.

In this episode you will hear about:

Resources mentioned in the Episode

Note: I've removed most of the resources from this section, as I always had Anki/Memrise etc. here every week. Now I will only put resources here that are very exclusive to the episode. For any other resource please go to the resource page for more information.