The people over at HarperCollins recently got in touch saying they recently released dictionaries for the Ultralingua application on the Android platform – sorry iOS users out there!

As somebody who had been growing frustrated with the inflexibility of Google Translate and the bulkyness of having several free, lesser good dictionaries for different languages, this offer seemed to come at a perfect time.

They provided me with a code that unlocks 5 Collins dictionaries from within the Ultralingua App, which is free by the way. I always think of my audience, so of course I had to ask for an extra code to give away to one of you guys out there. You can find the details on how to win the 5 free dictionaries at the end of this review.

They also sent me a copy of the press release, and without boring you too much I'd just like to share the first title and subtitle:

That all sounds good, but let's take a look for ourselves – shall we?

Once the app is up and running one is presented with the following user interface: 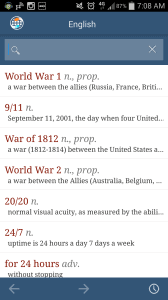 One can navigate the dictionary as you'd expect, and I found no problems or annoyances at this point. However, most of us probably wouldn't require the English Dictionary, so what exactly is available from within the App?

The Ultralingua app additionally offers Latin and Dutch for English speakers, as well as a few other language pairs. 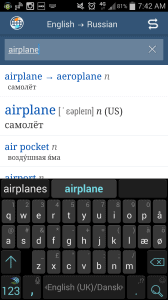 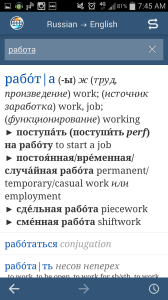 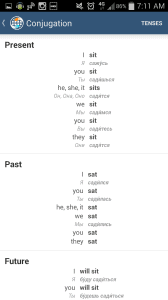 It's rare that I let pictures speak for themselves, as it is a written blog! But just check out how much you get from each word. This is not simply like Google Translate word for word, it's the great quality we have come to know and love from high quality dictionaries.

I found the conjugation tables particularly helpful as that was giving me a ton of headaches in Russian. Yes, you could look up the “rules” but even within the rules there are so many exceptions and different types of verbs. Simply looking it up directly is super awesome.

Basically it's like carrying those old-fashioned huge books around and then through magic instantly look up every word, with practical uses and conjugations.

What does the Collins Dictionaries for Ultralingua cost

English and Thesaurus are always free, Collins has stated. But the rest of the dictionaries I have mentioned are paid versions.

The cost of these dictionaries is less than $8. Due to currency differences I can't tell you exactly the cost in your country, but I would be charged 46.04 Danish kroner, which according to Google as of today equals 7 dollars and 81 cents.

The French dictionary is slightly more expensive, but in turn is more extensive with more words and examples.

In my opinion paying 8 dollars for dictionaries of this caliber is totally worth it, I've messed around with free dictionaries for a long time and let me just say I'm happy I don't have to do that any more. All the dictionaries are also within one app, which is easier for us who work in multiple languages every day.

How to win 5 free Collins dictionaries of choice

1. Install the Ultralingua app -> Click here to go to Google Play Store to Install it

2. Open up the free Thesaurus and leave a comment to this post with a unique synonym from the entry: “zenith”

One lucky reader will be selected randomly on Monday the 27th of October.

I want to say thank you to John from HarperCollins for letting me try out this new integration and also for making another set available for a fan. That is great community appreciation.