Yet another Polyglot Gathering has passed and true to tradition I'm summarising my experience and thoughts on the whole event.

If you're not familiar with the Polyglot Gathering, it's basically a super-social event for polyglots and language enthusiasts who come together in a hostel in Berlin for 4 days to socialise, network, practice languages, and watch exciting presentations.

I've been going for all of them, and I, in fact, credit a lot of my excitement for language learning today for the first event back in 2014.

Sitting at home playing video games all day, depressed and without purpose in life, I realised that the upcoming new polyglot event could be just what I needed to break free. After the conference I was so excited, that I wrote a 10000 word trip report about it!

For me it's definitely the highlight of my year.

It's a way to get energised to learn languages, test out what you've learnt and, perhaps most importantly, catch up with amazing people who I don't get to see too often. It almost feels like a family reunion.

Before I get too ranty, let me present my experience of the 2016 Polyglot Gathering:

The awesome – in no particular order

1. Organisation was flawless – as per usual

I cannot believe how flawless the event runs every year. A huge thank you to the volunteers, especially the main organising team for their endless efforts to achieve this. The audio quality was also improved, and there were barely any delays or technical snitches.

It was awesome to meet up with many of my friends and contacts I've made over the years. I would often miss talks because I was deeply engaged in conversations with interesting people. The people truly make the conference!

Additionally the people from Italki are just really cool! 🙂

In previous years I've spoken Scandinavian with people, but this year was the first time we took it to the next level. Together with Irina Dahl and Karl-Erik Wångstedt I had great conversations completely in Danish, with them speaking Norwegian and Swedish back.

I have a long-term plan to actually learn to speak Norwegian and Swedish, as being able to understand something fully is not entirely speaking the language. It would be fun to spend a few weeks in the future to get the pronunciation and curiosities down.

So many things to learn….

I was not exactly expecting to speak a lot of Hungarian at the conference, because my level was still really low. I don't go to the conference to practice languages at all, so when I do get the chance it's always a nice experience.

One of the later days I came into the main room and was quickly beckoned over to a small group of people, and I was delighted that the group was speaking Hungarian! Led by an American, whose name escapes me at the moment, who spoke great Hungarian.

As I was welcomed to the circle I answered a few questions, but otherwise just listened and interjected something once a while. It was a great confidence booster to be understanding and speaking a new language – that feeling never gets old!

I also find it interesting that Hungarian has appeared a few times as a “trendy” language, when my introduction to it was a complete coincidence.

Nothing much to say here. The team did a great job, led by Timwi and my team did reasonably well but was ultimately knocked out by a 3x multiplier 3-answer question. It was a bit frustrating, but hey, that's the name of the game.

During the show a question was; Name a language-related podcast and I was super proud to see the results, beating out the ENTIRE pod101-franchise (34 languages!) easily. 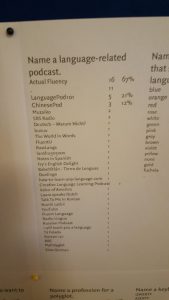 Just a follow-up to the previous one, it was so exciting that so many people came up to me and said how much they enjoyed the podcast. It really means the world to me, and I will use this energy and motivation to keep producing top quality stuff.

Without you guys there would be no podcast. Thank you!

Special shoutout to Miroslav Šedivý, who was the first listener to say hi back in 2014 and continues to give me tons of valuable feedback for how I can make the show better.

Although there's always room for improvement I am happy to be able to call myself public speaker! I successfully completed my talk on language learning principles and received good feedback for it.

Here's a visual representation of my talk courtesy of Antonio Libertino (http://speakitalianmagically.com/) 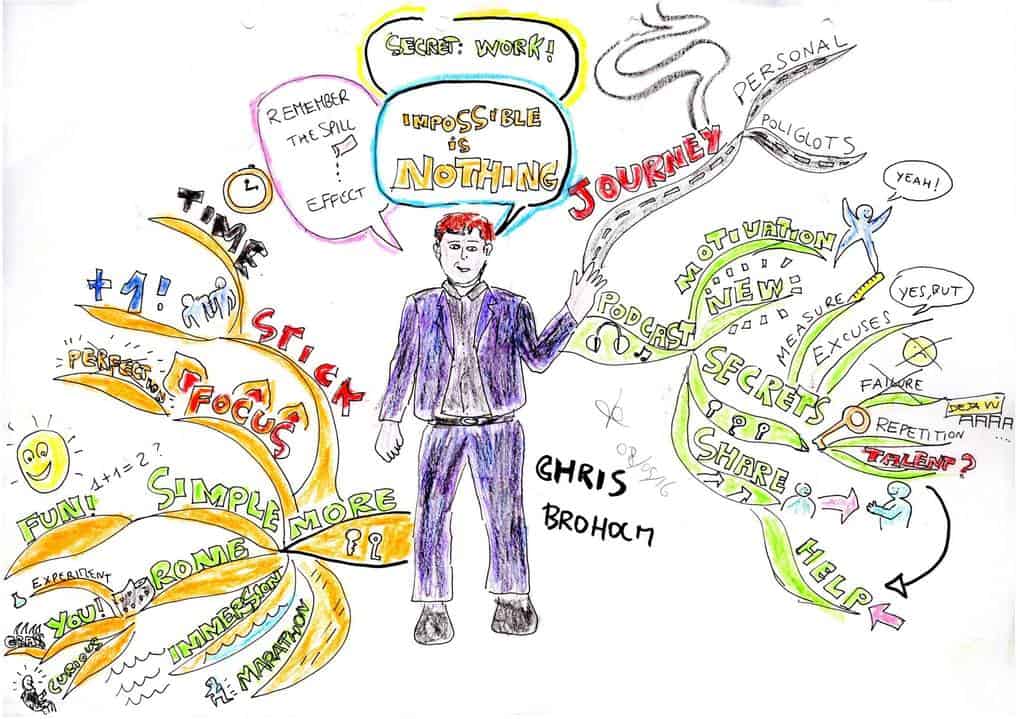 I'll use this success to make an even better presentation for Montreal.

The not so awesome

I was once again reminded of my feeble skills in Russian. I attempted several conversations, and I just didn't perform at all. I understood a lot more than I could produce, but it's still a shame that I haven't given this language more effort as of late. I will try and include more input as well as vocabulary training ahead of next year's conference.

It's funny how dedicated effort and not making a ton of excuses can make a huge difference. I think my Hungarian is about to eclipse my Russian, which is interesting because I've been “studying” Russian for 2-3 times longer.

2. Headaches and a bad cold

During the second or third night I slept really awkwardly (and not a whole lot either) and had a terrible neck pain, that lead to head splitting migraines. This meant I had to sometimes take long breaks, eat painkillers and go to bed early.

Towards the end of the event I also started experiencing cold symptoms. As I'm writing this I'm completely stuffed up and struggle doing anything.

I feel like I'm being punished for having too much fun….

3. Not meeting a ton of new people

One of my regrets this year is undoubtedly not meeting more new people. I'm happy to say that I know a ton of people in the community now, many of which I consider close friends, but there's always something interesting about meeting new people – expanding one's horizon and learning new things.

I did not do a good job of that this year, mostly leaving it to other people to come up and say hi.

This hurts because during the presentation I noticed that roughly 50% of the participants present were taking part in their first gathering.

Of course I imagine it's not possible to talk to everyone, especially as the number of acquaintances grows and grows, but still. I need to get out of my introvert shell and just introduce myself.

Did you take part in the 2016 Polyglot Gathering? What were your ups and downs?