Why Learn Russian? Well, Russian is a wonderful language, and also the first language mission I did here on Actual Fluency. In this post I share my top reasons for why you should consider learning Russian. 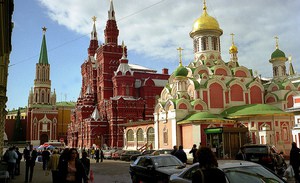 OK – we get it. Russian is difficult. But why should you even consider learning it?

Let's take a look at some of the common reasons for learning Russian.

By far the biggest reason, in my opinion, to learn any language. If you have family of Russian heritage, good friends, partners or lovers then you definitely have to learn the language in order to greatly enhance your relationships. It's also a great way to get help, feedback and motivation for when the studying gets boring.

The Russian language is incredibly unique compared to the romance languages. Not only do they use a completely different alphabet, but they also think differently. A huge obstacle I had to overcome in my Russian studies was that I could not just simply translate from English to Russian in my head. That would never work out.

A self-explanatory one. There are almost 300 million speakers of Russian in the world. By learning it you will definitely not run out of people to talk to. Why learn Russian if not to speak with Russian native speakers!

In case you are interested in a career in world politics or translation/interpretation for them.

Russia is an absolute beast of an economy and by learning the language you can get an advantage over other businesses when dealing with Russian customers or clients. Do you want to sell or buy from Russian, well then get learning – it'll pay off in the end.

With so such a language country, you will not struggle to find a career use for your newly learnt language. Not only could you move to Russia and use English to make a living, but you could also work in companies outside Russia acting as a communicator or simply a cultural adviser.

The Russian and Soviet cultural heritage is absolutely incredible. From amazing writers to legendary soviet movies you can be sure to fully enjoy the creative richness by learning the language.

Why I chose Russian

I chose to learn Russian as my first self-taught language back in 2014.

Here are some of my personal reasons:

I've been a big fan of the video game Dota for a long time. The game has a substantial Russian following, so by learning Russian I can communicate with the people I play with which often leads to more enjoyable games.

I'm now also able to follow the Russian commentators instead, which is great.

I figured if I could somehow learn Russian independently as my first language, then no language would be a challenge. This is a huge double-edged sword as the difficulty has meant long breaks and definitely a lower level than I would've seen if I had chosen French or other close languages to English.

As I mentioned above, Russian is SOOO unique and for me that was a very exciting part of picking it. The grammar never ceases to amaze (and perplex) and the flexible and concise nature of the language is awesome.

It has been a very tough challenge, especially as my first language. However, it's also been extremely rewarding and I'm looking forward to getting my Russian to even higher levels.

I hope the post answered your question; why learn Russian?

Be sure to leave a comment below with your personal motivation for learning Russian.

Check out my extensive article on how to learn Russian, where I also share some of my favourite resources and courses.