Is it possible to learn a language in one month? How far can one get? This is the premise of a new language learning documentary by Connor Grooms, whom I recently had the chance to interview on the podcast. Read on for my thoughts on the documentary.

Before I go into the movie, let me just remind you that you can win a free return flight to anywhere in the world by signing up to Connor's giveaway. He started it to help build buzz and publicity for the movie. All you have to do to win the flight, plus some language learning goodies, is to enter the give-away here. Good luck!

My thoughts on Spanish in one Month

One of my favourite things to follow in language learning is when people show me the actual working process. Benny over at Fluent in 3 Months used to do this a lot and I've also done it myself with putting my tutoring and Memrise sessions on YouTube.

Connor decided to move to Medellin, Columbia without speaking 10 words of Spanish so the documentary follows his intense mission to try and learn it in one month. According to himself he's an all-or-nothing kind of person and he felt it suited him better to do a large chunk of work upfront rather than spreading it out.

On this I find myself very similar. I struggle with regularly putting in small efforts, but instead go crazy for days or sometimes weeks – working way harder than normal.

I greatly enjoyed watching the film. The first reason for this is that the film was extremely well made. It's easy to tell that it's not a high budget or professional film, but the editing and shooting is all done very, very well. There's a nice storyline to it and we get to see not only the highs, but also the lows.

I particularly enjoyed during the middle of the project where Connor is matched up against a native speaker to test his progress and the guy is just ruthless! He speaks super fast and it's fun to see Connor stumble around a bit. Perhaps because the situation is all too familiar for most of us.

During the film he also consults familiar faces in Benny Lewis, Idahosa Ness and Brian Kwong on language hacking, pronunciation and accountability/motivation respectively.

Without adding any more spoilers I'd say this is a very enjoyable film and I cannot believe how Connor actually found time to record and plan it at the same time as he was trying to learn a new language in just one month.

What did you think of the movie? Let me know in the comments below

PS. I was mentioned in the credits! Super happy to see that. Thanks Connor for making the movie and I'm happy I could contribute with a spoonful of inspiration for such a great project. 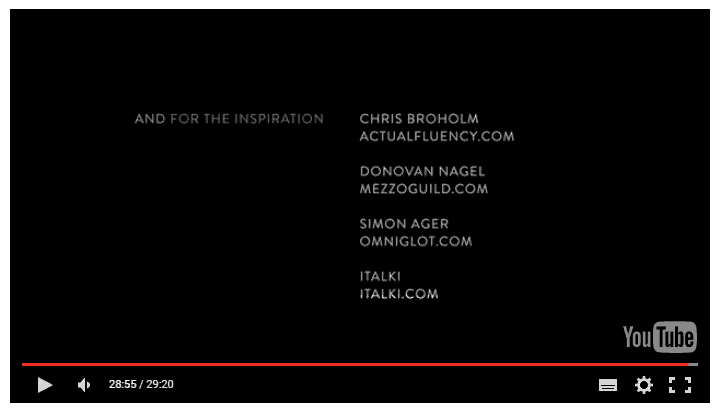