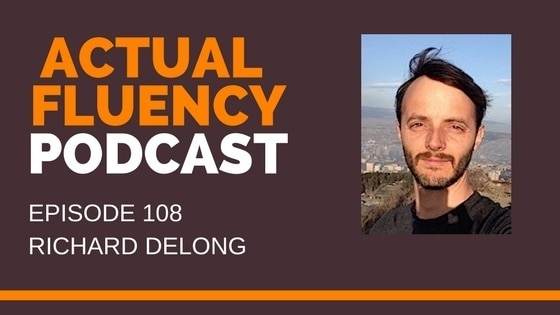 Richard DeLong comes on the show to share his experience of moving to eastern Europe and learning the languages around him quickly.

At the age of 17 Richard went to Slovakia as an exchange student and was able to quickly learn Slovak. Later he lived in Russia, Ukraine and finally Georgia where he resides now. Along the way he developed his own method of foreign language acquisition, which he dubbed: Frictionless Foreign Language Mastery.

This is what you'll hear about:

Listen to the episode

Thank you for listening!

Thank you for tuning in to the show this week. If you have any feedback or questions for this episode, please don’t hesitate to leave them in the comments field below.

If you enjoyed the episode, don’t hesitate to share it using the social media buttons below. I’d also be super stoked if you would take a minute to leave an honest review of the show on iTunes. It really means a lot to me and the show and I appreciate you taking the time.

To stay updated with the show, use the following links to subscribe:

iTunes – For iDevices and PCs

Stitcher – Alternative to above

AFP 172 – Richard Howeson: From CD-ROM to App learning with uTalk

I'm the founder of Actual Fluency where our aim is to support language learners from all over the world with strategies, inspiration, and advice.

Overcoming the Dips of Language Learning

My Experience with Michel Thomas Russian